A Formica-wood topped table, a plastic chair and one of the worst cups of coffee I’ve had in my life. But a view of the local dolmus station across the road from the bakery-cafe. Ancient white Renault 12s rattle past full of families, the back seats wedged with bodies. The short cough and whir of a moped starter motor and putt-putt-putt as it comes to life.

A sleek, black BMW cruises up, seal like, and stops. The local big man, I think. Instead, two flour-covered bakers climb out, grinning, and brandishing green plastic baskets of still fragrantly hot bread they carry to the cafe.

The reliable, regular chatter and loose clatter of a white diesel dolmus – a local minibus and the way almost everyone travels here. A white plastic plate in its windscreen, fixed with suction cups, says “Dalyan”. It slowly unloads its cargo of people, bags and parcels. Countryside commuters, two lost-looking tourists with hats and wheelie cases. Someone has hammered the end of the exhaust to attach a new, unrusted, end section. It just adds to the rattle.

A sun-faded red PX200 – Italian scooter aristocracy in the sea of Chinese urility mopeds – heels over as the rider flicks a turn. He smiles at my recognition as he catches the bike on the throttle and powers it upright. 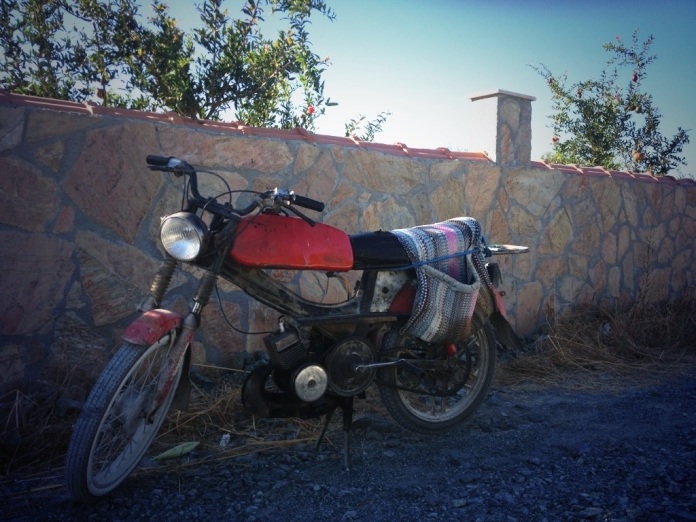 My coffee arrives, the young waiter apologising that most of it is in the saucer. “I’m sorry… Coffee…” And he mimes a fountain spraying and smiles broadly. He places a filo pastry tart, specked with black poppy seeds, beside the cup. He apologises again, pats me warmly on the shoulder with another grin and resumes propping up the counter and chatting up the local girls.

A British couple, their Lancashire accents as out of place in the sunshine as his grey socks, tuck their newly-bought loaf into a hessian Tesco bag. “We’ll be alright now, love,” she says as they walk off holding hands.

Another moped rasps past, its pilot tanned, tight white t-shirted and topped with a gold braided captain’s hat. John-Paul Gaultier on a Mobylette. 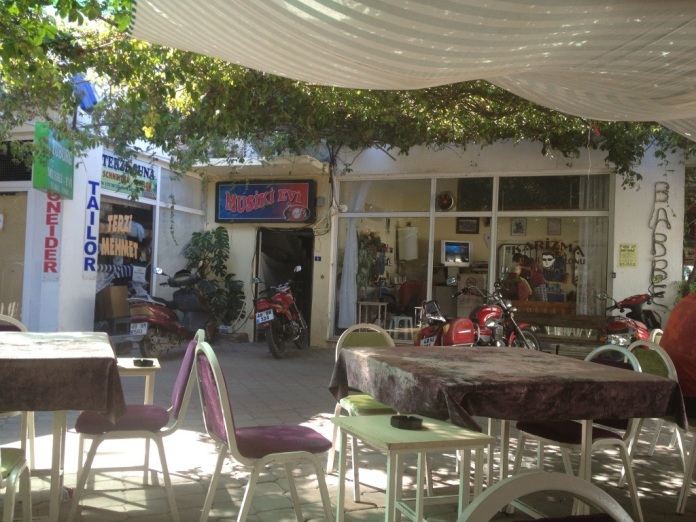 A disreputable white Fiat parks carefully aross the “no parking” sign that gives the dolmuses space to wheel and turn. Its owner scurries in and out of the baker’s between buses as a grey-moustached man on another moped smilingly weaves his way past.

The two flour-covered bakers have stopped for tea and are holding court. The laughter is rich and warm in the sunlight, their work for today over.

Another family-filled Fiat stops, the young boy’s nose pressed against the glass as he watches the bikes flick past. A young couple, maybe 18 or 19, kiss goodbye. The boy makes a face.

Although all white and all carefully polished, no two dolmuses are alike. One pulls in, its bonnet emblazoned with the blue and red Ortaca Minibus Cooperative shield. Another older bus sports a cartoon Sylvester the cat in one of its side windows. Nearly all have q’uranic verses in Arabic script swinging from their driving mirrors. Each advertises its destination on a coloured, plastic board suckered to the windscreen. Dalyan-Ortaca-Iztuzu. Doors are open in the heat and the nasal thread of shawms underscored by drums, comes from each radio and blends with moped exhausts and horns.

The drivers lean against their buses, alternatively joshing each other and shouting their destinations to likely passengers. There is barely space for three buses on the hard standing, so others jostle and wheel, half on and off the pavement, for space.

At the centre of the chaos, marshalling, conducting and answering queries from locals and tourists as easily, is a white-haired man in his 70s. The drivers wear faded t-shirts, long trousers and well-used sandals. He wears a two-piece, immaculate pinstripe suit with a wide yellow tie and crowned with a sunbleached beaten leather cowboy hat. The suit is so shiny with age that it reflects the light and it is easily three sizes too large, but the air of authority it adds is unmistakeable. The man’s grin is easy and almost suggests that he realises his suit is of place, but he is enjoying the joke too.

A waiter from another cafe easily weaves his way through dolmuses, mopeds and bicycles, four glasses of apple tea poised on his tray. The suited Controller takes one, his grin even broader, and turns to answer another bus question from the gaggle of tourists that have appeared at his elbow. A man who clearly enjoys his job.