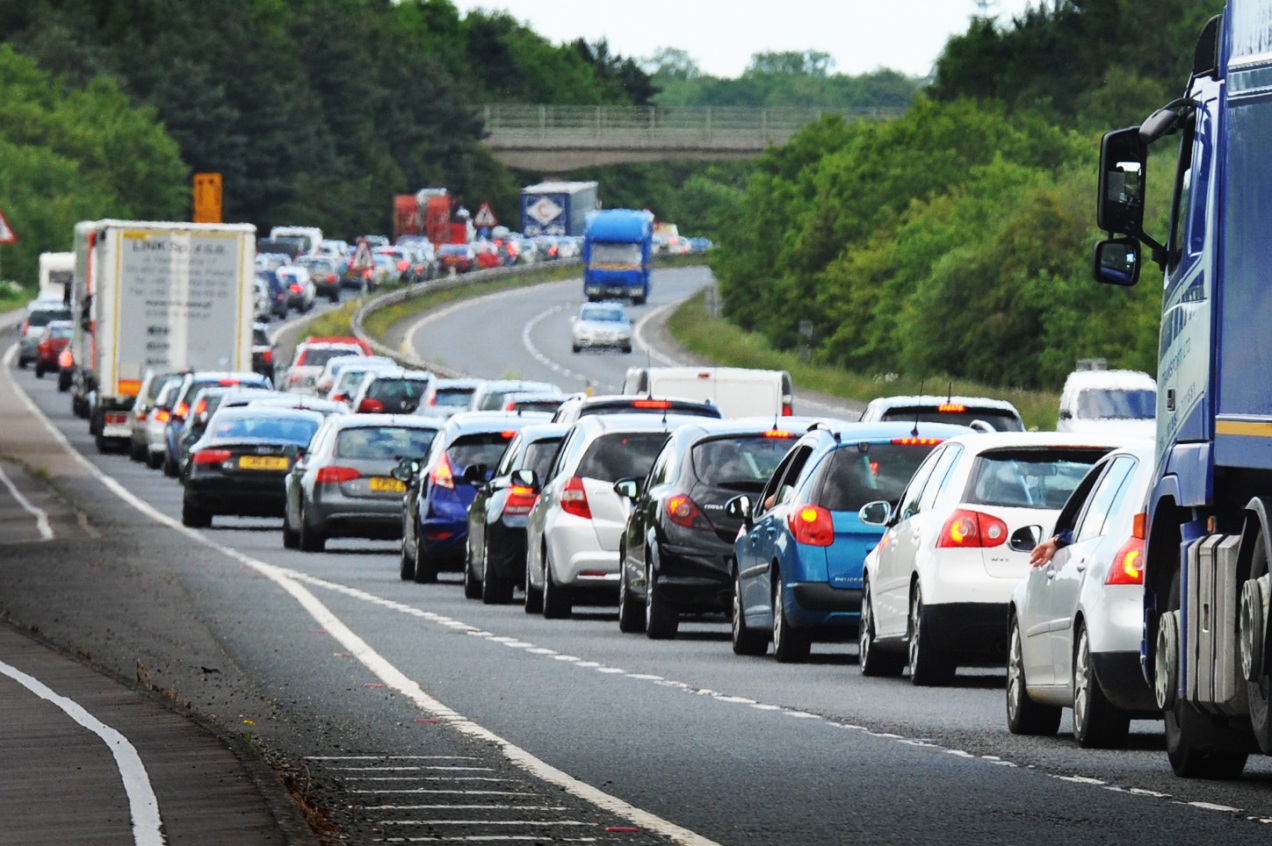 Electric cars need to be plugged in every now and then. But what do you do if you haven’t got a driveway?

As the countryside around Bampton fills with huge new housing estates and commuters, even the lanes that lead to major routes are rammed in rush hour. Traffic on the A40 is moving so slowly that the County Council are rumoured to be considering parking meters.  We could do with the railway back again (we even used to have a station – fancy!), but there’s little chance of resurrection. 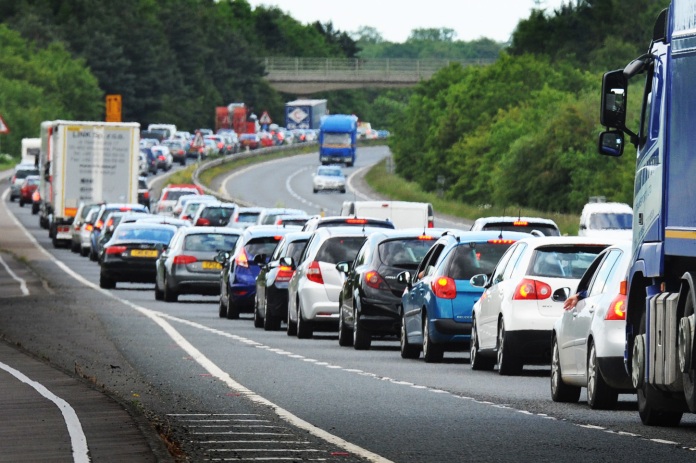 The A40 from Witney-Oxford. Image from The Oxford Mail

And car pollution is back on the agenda.  Specifically diesel pollution from private cars. Politicians seem to think this is different diesel than the stuff used in domestic heating, lorries, trains, buses (peace be upon them) and taxis.

Their response is as predictable as it is tedious; they’re wading in with a big tax-and-bannit stick.  The diesel car on your drive is now worth around 30% less and, if you live in the countryside, the alternatives are thin on the ground.

So you might be thinking about an electric car.  And why not?  They’re green (at the point of use), they’re cheap, there’s no tax on them (yet) and, if you get the right one, they go like hot tar off a shiny chrome shovel.  That’s an attractive proposition.  Perhaps it’s time to convert?

If you live in a town, you might have a handy charging point nearby.  There’s an excellent project in Oxford – Go Ultra Low Oxford, for example. But what about people who decide to trade their conventional motors for a new electric car and park on the street, particularly out in rural areas?

This is the practical problem I’ve recently tried to solve.

Of course, there’s an easy and simple route. Just run a wire from the house, across the pavement under one of those little plastic cable covers, to the road. 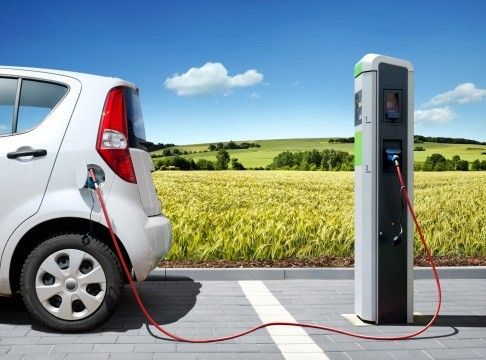 But that sort of thing would fill County Hall’s offices with litters of Health & Safety kittens.  And there’s little point spending a stack of money on a new electric car only to find that someone spots the wire and bans me from charging it.  And my neighbours are lovely – I don’t want them having to lug prams and their bins over a semi-permanent pavement speed bump.

But surely someone’s thought about the thousands of people who aren’t fortunate enough to have a parking space or a driveway?

For once I decided to play by the rules and find out.  But that’d be a cinch – right?  After all, the Government are behind electric cars, so getting information and help in a county as pro-green as Oxfordshire should be easy.

I start on the web.  There are grants for electric car charging points as well as electric cars themselves.  If you fancy a look – cars are here:  https://www.gov.uk/plug-in-car-van-grants and https://www.gov.uk/government/collections/government-grants-for-low-emission-vehicles for charging.  But these aren’t for on-street charging points, they’re for off-street charging for people with driveways.

That was no good to me, so I began by searching the County Council website (as the .gov website suggested I did) about how to get on-street charging points installed.  There’d surely be a whole library of helpful information.

Nope.  There was a slightly hair-shirted and miserablist page that said unless I was driving at least 50,000 miles I should consider a small petrol or diesel car.  I remember when the council’s transport supremo drove a rather smart, large-calibre Jaguar saloon, so this advice raised a wry smile and thoughts of Zil Lanes. 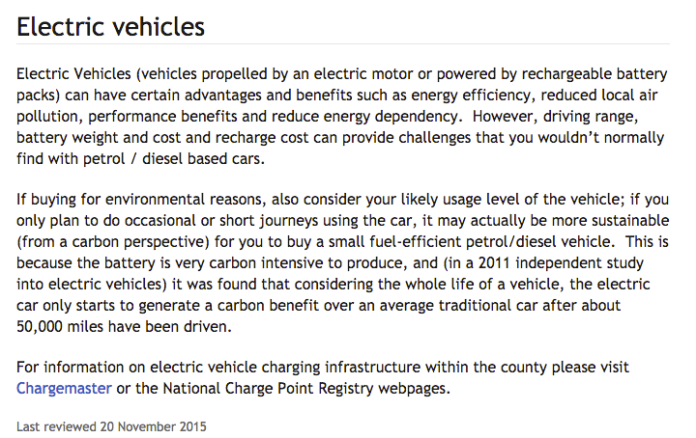 The page went on to suggest I contact a third party charging point installer for more information.  It also advised that I lift share (anyone fancy sharing to my meeting at Tower Bridge at 5am at short notice? Thought not), use a taxi, a bus or just not go anywhere.

This is what Chargemaster, who make and instal charging points, say in their terms and conditions:

You also confirm that there is garage or other suitable private off street parking within your premises, compliant to the conditions set by OLEV, allowing you to charge your vehicle safely and without creating a trip or other health and safety risk to yourself or any other party, with modern household electrics. Full eligibility conditions that can be found on the OLEV website on: http://www.gov.uk/olev.

So I gave them a call to check and to see if they could help.  Nope.  They were as helpful as anyone could be, but they can’t instal a charging point if you’re going to run a cable across a pavement.  They’d sell me a charging point but I’d need to find my own electrician to install it at my own risk.  They also said I should call the council.

Round One to Kafka.

Surely it couldn’t be this hard?

Before I picked up the phone again, I looked elsewhere on the County Council’s website to make sure I’d not missed anything. Nothing on electric cars.  Only the page above.  It was almost impossible to find a phone number for anything except paying parking fines, so I tracked down one for a completely unrelated department and gave them a call, hoping they’d point me right.

The lady I spoke to was as helpful as she could be and put me on hold while she asked her colleagues.  Apparently the chap I needed to speak to was the Network and Street Coordinator.  She couldn’t reach him, so asked me to send an email for his attention.

I did as I was asked, but somehow the email ended up in Council’s system for reporting potholes so they can ignore them. 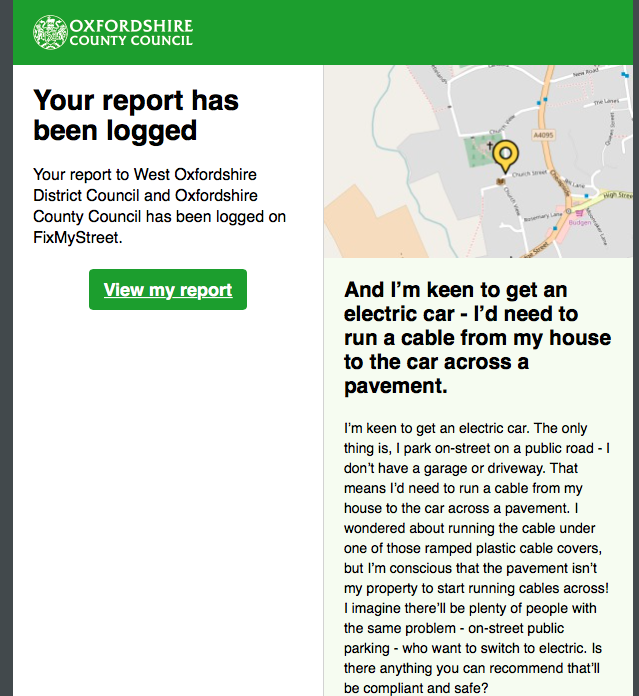 Round Two to Kafka.

It seemed I had fallen into the Pit of Careless Disregard that is in the basement of so many local authorities.

But I was determined to claw my way out.  More Googling sent me to the Air Quality team at Oxford City Council.  The very helpful officer there (no – seriously) said she wasn’t able to do very much as (logically) Oxford City Council just look after the City not the county.  Had I tried the County Council?

Round Three to Kafka.

Next, I tried our local team at the ever-helpful West Oxfordshire District Council.

“Hi – I’m trying to find a way to run an electric car out here in Bampton. My house doesn’t have off-street parking, so I park on the road. Is there any way I can charge an electric car on-street?”

The reply from Wood Green was courteous, but sent me straight back to the County Council:

“Thank you for your email, can I please ask you to forward the details through to Oxfordshire County Council’s Highways department in the first instance?”

I explained I’d already tried this route a couple of times.

They said they’d talk to the local Parking Team to see if they could give me some advice.  I couldn’t work out why the Parking Team were the source of all wisdom on car charging points, but I am not wise in the ways of local government.  So, more waiting.  It seemed sensible as I had no desire to pick up a ticket for charging my leccy car.

They didn’t hang about with a reply – within the week my in-box went ping:

“Thank you for your enquiry relating to installation of an electrical vehicle charging point in Bampton.Whilst there are grants available West Oxfordshire District Council, (WODC) does not have the resource capacity at present to make the necessary arrangements and installation of a charge point.

WODC would need to get permission from OCC as the highway authority.

There would be an on-going cost/resource implication relating to insurance, who would be responsible for maintenance, who pays for the electricity and who has overall responsibility.

It is unfortunate that OCC also appear not to have the resource capacity to deal with this which is why I suspect your query was passed back to us.”

The officer clearly wanted to help but was trying to claw her way out from a Sleeping Beauty-style thicket of red tape.  All I wanted to do was charge a car – something government wants me to do – yet everyone seemed keener on reasons why I couldn’t.

Round Four to… oh, you know by now.

It felt like no-one had thought someone in a village would want to own and charge an electric car.  No-one had got a group around a table from each of the authorities and said “OK, these electric car things are going to be big. Let’s find a way to help people in rural areas charge them and hey, I bet some of them haven’t got driveways.”  Instead, I was passed from council to council, authority to authority, none of whom seemed to have thought people might want to charge a car at the roadside.

Individually, as ever, everyone at the councils I spoke to were terrific – helpful, kind, trying their damndest – but the structure they worked within tied them down.

And here – for the moment – my ideas, time and, bluntly, the will to live, have run out.  I’ve given up on the idea of an electric car, simply because I have no idea how I can find a way to charge it legally and safely.  And no-one seems to be able – or know how to – help. 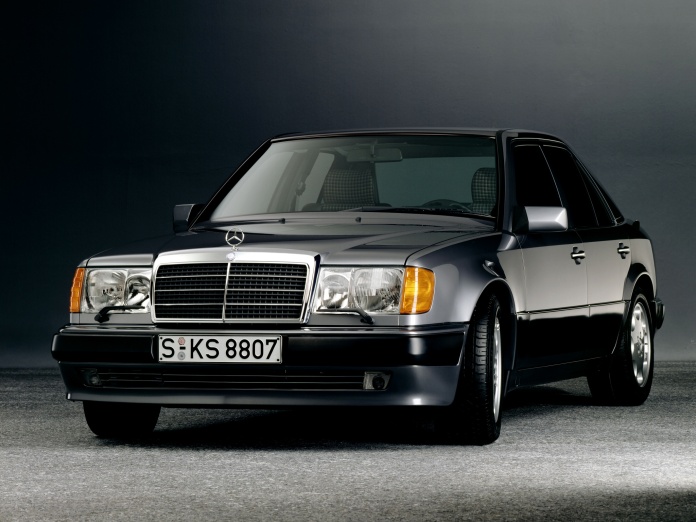 So instead, I’ve done what Mr Gove told me to do and sold my old, economical, reliable diesel that did 50mpg – at a huge loss.  To replace it, I’ve followed that County Councillor’s example and bought a large, comfortable petrol car.  It’s an old V8 Merc that will hit 60 from 0 in under 6 seconds and does 26mpg but is still Euro IV compliant.  Ironically, that makes it exempt from the new London Toxicity Charge.

I’ve just had a note from one of the Communities Team at Oxfordshire County Council about plans for charging points in Oxford City:

We will trial 6 different solutions over 39 bays which provide residents with a means to charge their ULEV car at or near to their home over 12 months. The long term aim of the project is to find a solution, or range of solutions which can be rolled out at volume across the city.

As yet we have no plans to expand the trial to the rural areas, but I am confident this will be a consideration going forward.

Sounds good.  There’s certainly a demand in central Oxford – and a growing one out here.

And I also heard from another OCC officer who proffered a superb, helpful real-world reply.  The long and short of it was “I can’t give you permission to run a cable across the pavement. And even if I could, you’d need the sort of public liability insurance that would make a supertanker owner sweat. But if you do decide to charge a car that way and no-one complains, we’ll not take action.

Maybe the V8 Beast’s days are numbered after all.

2 thoughts on “Charging ahead or still on the grid?”