Even if you turn right when you climb aboard and aren’t allowed more than 100ml of anything, there’s still a romance to flying.  Originally made for wartime pilots and observers where precise navigation was a very important thing indeed, fliegers are part of watchmaking heritage. 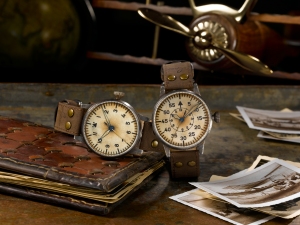 And plenty of makers want to claim a whiff of aviation fuel lingers about their watches.  But what makes a proper flieger?

Back in the days when all the best pilots flew red triplanes and had ‘von’ in front of their surnames, the pilots shooting at them used pocket watches to navigate.  The Mark IV.A and Mark V British pocket watches were the thing to have in the cockpit of your SE5.  Large enough to hold with gloves on, solid enough to survive and clear enough to read in a shaking aircraft.

Later, with typical precision, in WWII the German Imperial Air Ministry laid down their own very detailed criteria that still form the basis of flieger-spec today.

And each watch had to be engraved on the caseback with “FL 23883”, indicating that it was a watch, airmen for the use of.

“FL 23883”. This number stood for “navigation devices” and could also be seen on each watch on the opposite side of the winder.

Back then, only a very few makers were good enough to meet the standard.  Laco was one of them, and kept company with Lange & Söhne, Wempe, IWC and Stowa. IWC went on in WWII to make a watch that met the British WWW (Watches Wristlet Waterproof) spec – the MkX.

Things are a little more relaxed nowadays, but there are still really three sorts of flieger:

Trying to find an original 1940s Laco will put something of a hole in your wallet.  And an original Luftwaffe watch is probably something you don’t want to wear every day.  But Laco are still making and you can pick up everything from a quartz beater flieger for under £200 to a full-on, 55mm-cased Model B replica for £2,200.

This is serious watchmaking.  The original handwinding ETA 6497.1 is heavily modified and ends up with a centre-mounted second hand (just like the original) and a woodpecker-neck regulator to make sure it hits chronometer standards.  Then all you need is a Hartmann jacket, a Heinkel He 111 and somewhere to park it. 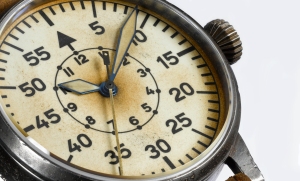 The chronograph could have been invented for pilots (although it wasn’t – Moinet’s chronograph was for timing horse races 89 years before the Wright Brothers).  Using a conventional watch to run time/distance calculations in a cockpit is pretty inexact.  It makes much more sense to have a second hand you can start and stop easily.  So airmen quickly started adopting chronographs.

IWC were one of the first to make dedicated flying chronographs, but it’s cheaper to qualify as a pilot than buy an original 1936 IWC pilot chrono.  Instead, there are modern pilot chronos that you can wear happily even if you’re flying a desk.

Hanhart also found their way onto the wrists of military pilots.  Again, the chances of tracking down an original from WWII are slimmer than finding a buried Spitfire in Burma, but you can adorn your cockpit with a modern, 44mm Hanhart Monocontrol that is almost identical.  Stop, start and seconds-zero – all on one button.  Cathedral hands.  The only major difference is that the modern version has a stainless steel case over the original’s non-magnetic brass. All you need to do is add your own patina.

Also at 44mm there’s the Laco Kiel – tricompax dials and self-winding.  Smaller at 38.5mm is the classic Sinn 356.  Again, tricompax, self-winding and a dial so clear you could see it even in a vertical spin, although you’ll probably have better things to do.  If 38mm is too small, Sinn helpfully offers the larger, but otherwise identical, 358.    Fortis will sell you an Aviatis Flieger Chronograph – 40mm, day/date and clarity you could read from a neighbouring cockpit.

If you’ve no need for a chronograph or just want a simpler, cleaner dial there’s plenty of choice.  Damasko have a somewhat more contemporary take on the flieger.  The DA30, 40 and 50 series all run the robust, accurate, 25 jewel ETA 2836-2 movement.  Clear, crisp classic flieger dials.  You could probably land your Lancaster on them too – Damasko don’t mess about when it comes to their cases.  These are ice-hardened to 710 Vickers and the movement is shockproof and antimagnetic to DIN standards.  The twin-chisel profile “12” marker on the dial is a more modern take on the trad flieger triangle. The Fortis Flieger Aviatis gives you the same sort of clarity and functionality with the classic “triangle and two dots” at 12 that’s marked out pilots’ watches since the Reichs-Luftfahrtministerium’s 1935 specifications.

Why wear a Flieger?

They often have soft iron inner cases and dials to prevent magnetism (in fact, modern watch metallurgy means you don’t really need this, even if your laptop does have a magnet for turning it on and off).  Mind you, the Sinn 856 will still shrug off 1k Gauss without breaking sweat.

They’ve all got clear, uncluttered faces that you can read without having to squint or look closely. Although you will, often, just for the hell of it.  They’ll have hacking movements, so you can set the exact time to a reference.  And ostentatiously starting a stopwatch is incredibly handy for limiting how long that tedious colleague yaps for in meetings.  And, let’s face it, how many of us haven’t slotted in behind that Nissan Micra stolidly planted in the middle lane and made machine gun noises?  It’s so much more satisfying with a Flieger on your wrist.

2 thoughts on “Why you need a flieger”