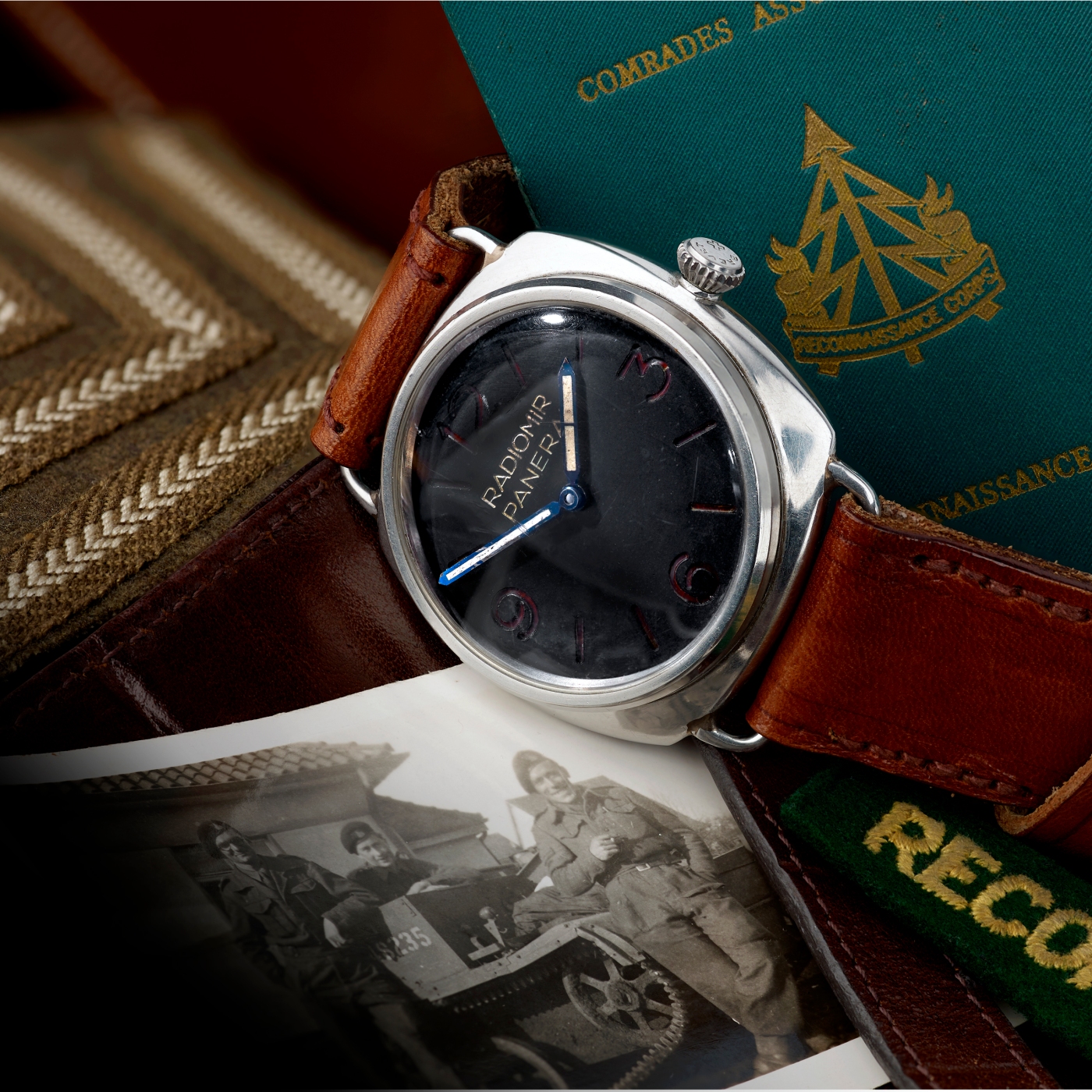 Watches, perhaps because they are so much more personal than almost any other artefact, have a knack of telling stories that bring the past vividly into the present. Here’s one of them…

In the gathering darkness of the evening of September 28th 1944, a group of 12 German Kampfschwimmer (military frogmen) slipped into the Waal river in Holland and began swimming silently towards the road and rail bridges at Nijmegen.

By 0630 they were confident they had made it back into German-held territory, and so swam towards the riverbank. But instead of being greeted by their own side, they found themselves surfacing under the noses of Sgt George Rowson and his men of the 43rd (Wessex) Reconnaissance Regiment. They’d swum the wrong way.

Understandably, Sgt Rowson and his men were keen to ensure the next stop for the group of Kampfschwimmer was a prisoner of war camp, but only after (as was customary) they’d relieved them of their watches and any other spoils of war.

Rowson explained, “They were wearing these rubber suits and also each had a watch on one wrist and a compass on the other.” It’s likely the compasses that had led them astray were made by Panerai. The watches in question were the rather more reliable ref. 3646 diving models made by the same Italian manufacturer for the Decima Flottiglia MAS, or underwater unit of the Royal Italian Navy.

Before the Allies liberated the city in 1944, German forces raided Panerai’s Florence workshops, taking many of the watches. The diving models were shipped to Venice, close to the Italian Maggiore Wolk’s kampfschwimmer training facility on San Giorgio in Alga before they were issued to individual divers.

And this one, in turn, now found its way from the wrist of its nameless German owner to Sgt Rowson’s.

As an early Panerai, Sgt Rowson’s new watch was powered by a ref. 618 Rolex movement, supplied by maker Cortebert. These were chunky, 16 ligne engines, beating at a relaxed 18,000bph and with 17 jewels. Relaxed, but still accurate, reliable and eminently regulatable, they had micro-adjustment screws on the balance and a power reserve of around 36 hours. Sufficient to still be ticking when you get captured because you’ve swum the wrong way, clearly.

The watch needed to be large (47mm) so it could be legible in low underwater visibility, hence the clear, cutaway and luminous-filled numerals on the dial. Where a modern watch would use phosphorescent luminova, this Panerai uses radioluminescent radium.

Over time, the radium filling in the numerals has faded so as to be barely visible whereas the lume in the steel, blued hands is still much clearer and brighter.

Logically, the 12-sided caseback and brevet-marked crown both screw down tightly to the case to make the watch waterproof. These early ref. 3646 casebacks seem to have hand-applied engine turning on the inside of the caseback, but only around the circumference. They’re still stamped “Rolex”, unlike the later models where Rolex markings were removed.

Sgt Rowson was clearly eager to ensure his new watch didn’t find another home by mistake. He carefully engraved the case back by hand with his full name, rank and the year he liberated the watch from its German owner.

Since leaving the bench, it’s been a well-travelled watch. Starting in Italy, the Panerai made its way (via the wrist of the unfortunate Kampfschwimmer) to Holland and thence to the UK and Nuneaton. After the war, Sgt Rowson passed the watch to his son who seems to have barely worn it.

Now the family is selling their WWII heirloom. Although, perhaps unsurprisingly it doesn’t run anymore, the watch comes with its original broad leather strap. Even more unusually, it also comes with a fragment of its original owner’s rubber diving suit.

This isn’t the first ref. 3646 to turn up in interesting circumstances post-war, although it may be one of the most engagingly storied and best provenanced. In 2016, a Cheshire man found a ref. 3646 in a chest of drawers while he was clearing the contents of his late father’s house. He had no idea of its worth (his father had bought the watch at a car boot sale for £10 some years earlier) and casually strolled into a valuation day at a local saleroom with the watch in his pocket, thinking it might make as much as £500.
It sold for rather more.

Apparently, post-sale, the auctioneer needed to explain to him exactly how much his father’s car boot £10 Pam had made. ‘When I told the vendor afterwards it sold for £46,000 he thought I had said “£4,000 to £6,000” and had to repeat it three times before he believed me.” Rather better luck than that of a certain kampfschwimmer in 1944.

Since the auction for this watch, another – owned by the same regiment’s Captain Packer – has sold.  That still leaves 10 of the original 12 Kampfschwimmer watches unaccounted for…

One thought on “When a watch tells more than the time”