Fancy owning a little piece of horological history? Well, you could head over to Geneva’s Patek Philippe Museum museum with your jemmy, a striped shirt and a ‘swag’ bag and quietly remove their Rieussec Seconds Chronograph.  Feeling even braver?  How about the earliest chronograph yet discovered? The Louis Moinet, in St. Blaise in Switzerland?  Sadly, there are only two ways to get hold of watches like these – theft, – or complex midnight negotiations with a bloke with horns and a pitchfork at a remote rural crossroads.  Like nearly every other mile marker along the road of horological progress, neither the Rieussec nor the Moinet are for sale. 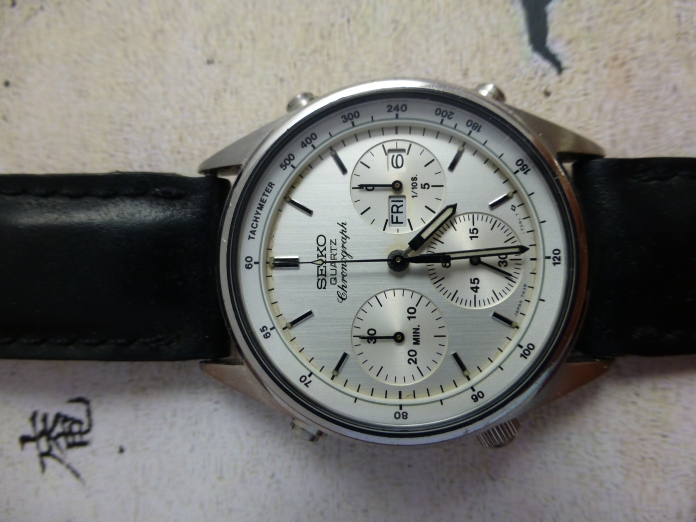 There is, however, an easier way if you’re prepared to be a little less choosy.  You still get a timekeeping milestone, but not at the cost of time behind bars or eternity somewhere warm.

How about the very first analogue quartz chronograph?  You’d better get a move on though; prices are rising faster than a traffic-jammed Morris Marina’s temperature gauge.

Just think of the history…

It’s 1982.  The Commodore 64 8-bit home computer is launched in the USA.  Heuer are still making watches like the digital Chronosplit and the Swiss watch industry is being stabbed to death with pointy quartz crystals.  But, even though some people think it is acceptable to wear a watch that is also a calculator, a compass, a barometer and a TV combined, there is a sense that digital watches aren’t quite where it’s at anymore. And that’s where Seiko – as they so often do – come in. 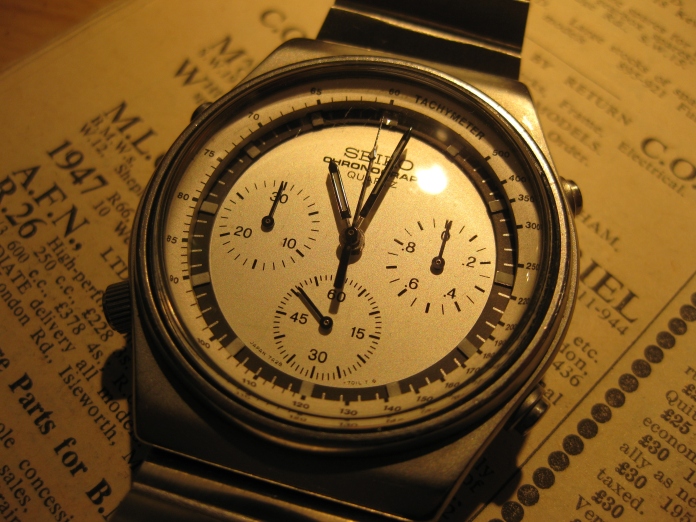 Now, I know some watchie people are sniffy about Seiko.  But it’s hard to be convincingly rude about a brand that makes one of the most accurate movements in the world (the 9F series – that’s +/- 10 sec pa) and that not only grows its own quartz crystals, but ages them for three months to maximise stability.  If that ain’t a manufacture movement, I don’t know what is.

They weren’t shy either.  Contemporary ads proclaimed “Watch history being made” and with the watch photographed against the dashboards of Porsche 911s and Ur Quattros, it was clear Seiko were pitching it high.  And they didn’t mess about.  The 7a series does that wonderful Seiko thing of seeming simple but actually being eye-wateringly impressive.

Let’s start with the movement… 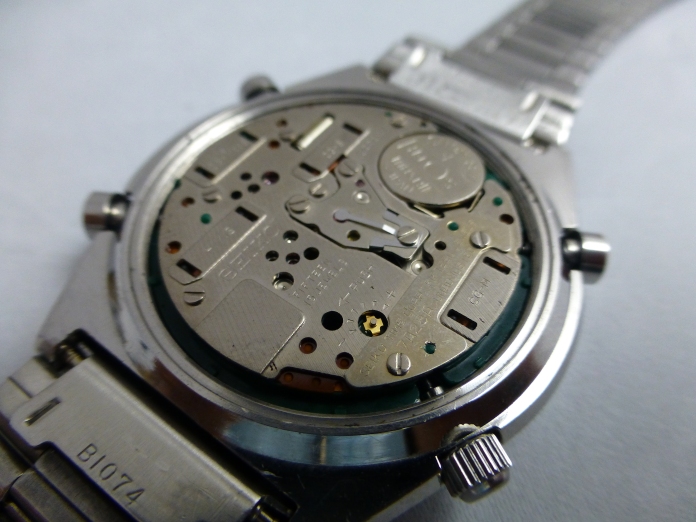 Seiko planned to take on the Swiss at their own game.  So rather than a modular, disposable plastic movement, the 7a series had a proper, quasi-decorated 15 jewel metal movement that could be regulated, disassembled and repaired.  It even has a very traditional finger damper spring on the centre seconds pinion.  Seiko really threw investment, thinking and effort into this one.  This explains why, despite often impressive abuse, so many survive.

Notice those little rectangular plates over parts of the movement?  Each of those protects a tiny stepper motor – one for each of the chronograph functions. And that’s what this watch is all about.  Press the button at 2 o’clock and the chrono starts.  Instead of a blizzard of flickering digits, the centre seconds ticks off the seconds one at a time while the 1/10ths dial zips round. In fact, it’s moving at 1/20th second intervals.  The minutes total up over at the 9 o’clock subdial and there’s a running seconds at 6 o’clock. 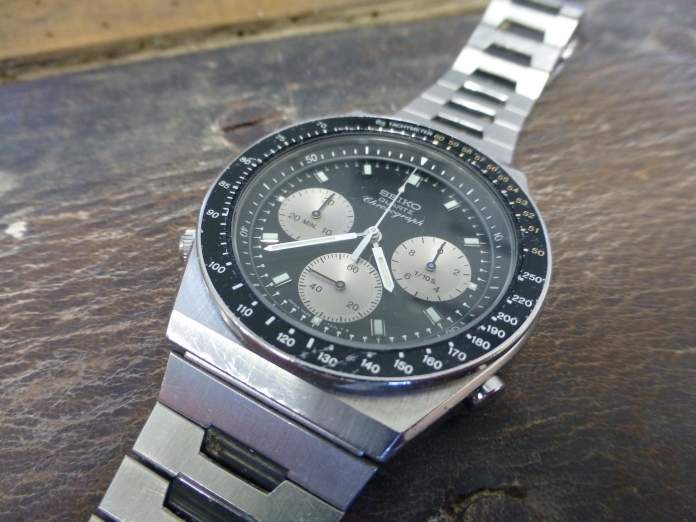 Today, that’s all pretty unremarkable.  But back in the early 1980s, when most watches had little grey, digital screens, this was serious stuff.  And it got better.  Hit the button at 10 o’clock and the chrono keeps running, but the hands stop.  So not only do you have a chrono, you have a split timer.

If you enjoy fiddling, you’ll discover something else about the 7a series… if you push and hold the 4 o’clock pusher, the two chrono subdials and centre seconds whizz round and reset themselves. And all this for around $250 back in the early ‘80s – that’s a blinding amount of watch technology for a mere $650 in today’s money.

The movement even found its way into watches carrying rather more upmarket logos, including the Ferrari ‘Cal. 531’.

If you like your complications, you’ll find something in the 7a series that suits you.  There are tide timers, moon-phases, Sports Quartz, fishing models (the 7A48-7050 Fishing Master with a moon phase and tide indicator), military versions (as supplied to the RAF and the South African Airforce).  If you fancy a military 7a though, you’ll need deep pockets.  Even a couple of years ago, you’d see these for around £300.  Now, they’re being posted on auction sites at up to £995 (although this one from’83 cost rather less). 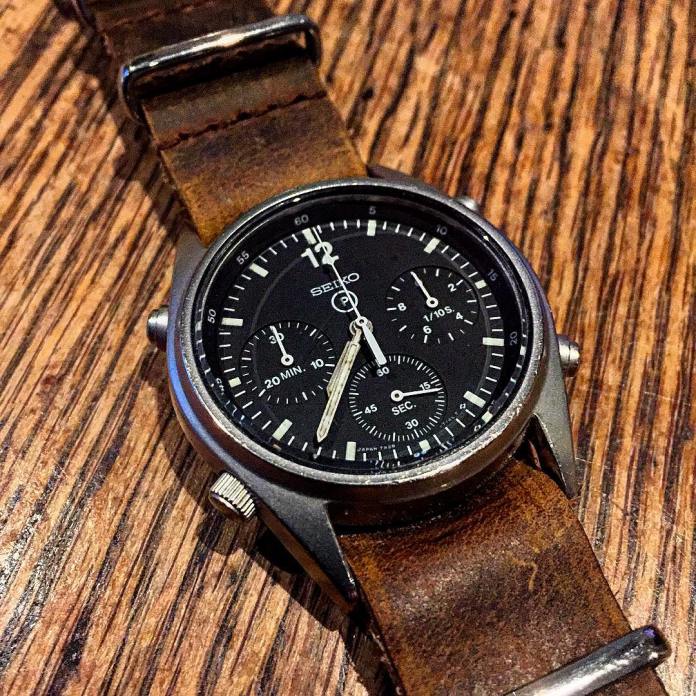 Movie fan? You can go after the 7A28-7001 Giugiaro-designed chrono that pops up (along with a few nasty critters) in Alien. Even Bond got in on the action and wore a 7A28-7020 in View to a Kill.

Like horological mythology?  You can happily spend time chasing the ‘Vulcan Flightcrew’, yellow-faced variant, the 7A38-701B.  The story goes that RAF aircrews on the Vulcan long-range nuclear bomber were issued these.  The yellow dial apparently made them easier to read in the Vulcan’s darkened cockpit. One of these went for nearly £600 back in 2011 despite there being no good evidence for the whole Vulcan thing actually being, you know, true.  They may never have been issued watches (the casebacks certainly don’t carry military markings), but they’re still indisputably handsome. 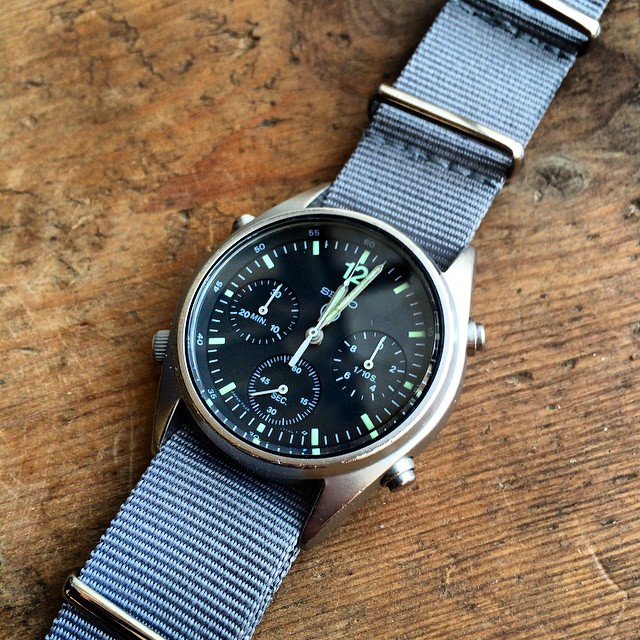 And because there were so many made – and made well – there is still the chance of turning one up at a boot sale, in a junk shop or on an auction site for pocket money.  Even if it’s not running too well, the proper, metal movement is perfectly serviceable and you can still get parts.  There’s a dedicated (and excellent) forum for the 7a series over at http://www.seiko7a38.com with plenty of help and information.

So, a piece of real horological history, plenty of variation, movie and military cred and robust enough for a (thoroughly repairable) daily wearer.  And change – if you buy well – from £100.  That’s got to be a serious bargain.  And a whole lot cheaper than spending the next twenty years in a Swiss jail. 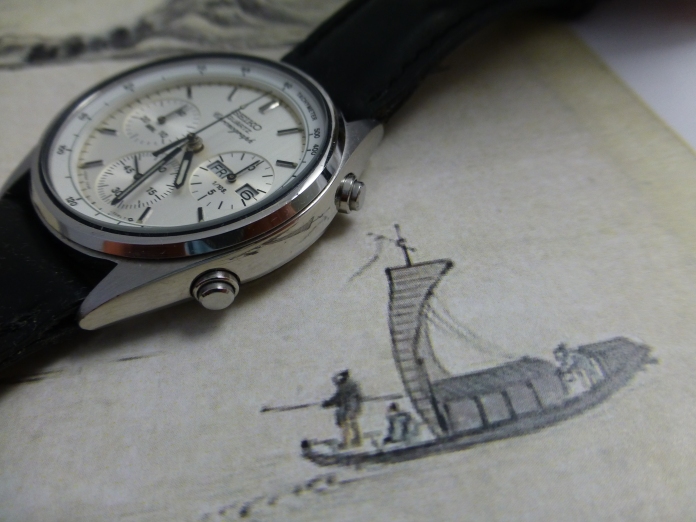 In my view, the prices on these are headed just one way.  Get one while you still can.

2 thoughts on “Seiko 7a28 – watchmaking history at pocket money prices”